Angkor Thom was the capital city of Jayavaman VII, founded in the 12th century, and one of the world's premier historical sites.  The empire of Jayavaman (a wonderful statue of him is in the National Museum in Phnom Penh) was larger than today's Cambodia.  It traded extensively with India and with China, both of which influenced Khmer culture, religion and architecture.  Angkor Thom was a square, about three kilometers on each side, with an outer wall, elaborate terraces, and a huge temple known as Bayon in its center. The king's residence and most other structures were made of wood and of course have not survived.  Fortunately, during its heyday it was visited by Chou Ta-Kuan, a Chinese envoy, whose diaries detail life in the Khmer capital. Most of what's known about life during the Angkor period is due to Chou Ta-Kuan's very detailed writings.

Below, the wall below the Terrace of Elephants.  From a structure on the terrace above this wall, the king and his guests watched elephants fight each other -- training them for battle against the empire's enemies, mainly the Cham people of what is now Vietnam. 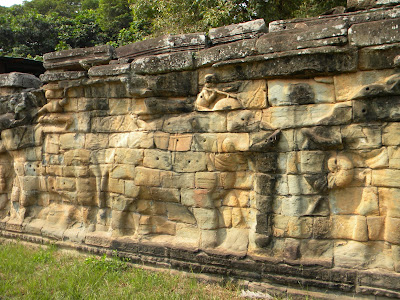 Below, heavily decorated walls below what is called the Terrace of the Leper King, supposedly because the effects of erosion on a royal statue resemble leprosy.  The figures are the heavenly dancers known as Apsara. 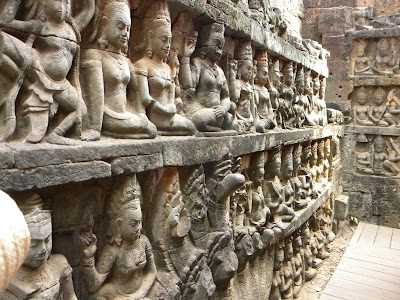 Below,  the causeway to the south gate at Angkor Thom.  Notice the face in the tower above the gate's arched opening. The figures on the causeway (they're also on the other side of the causeway) represent good and evil, demons and gods, engaged in a tug of war that's at the heart of the Hindu creation myth.  Using a five-headed naga serpent as the rope, they pull and pull for 1,000 years, during which their battle churns the primordial Sea of Milk, creating among other things the Apsara. 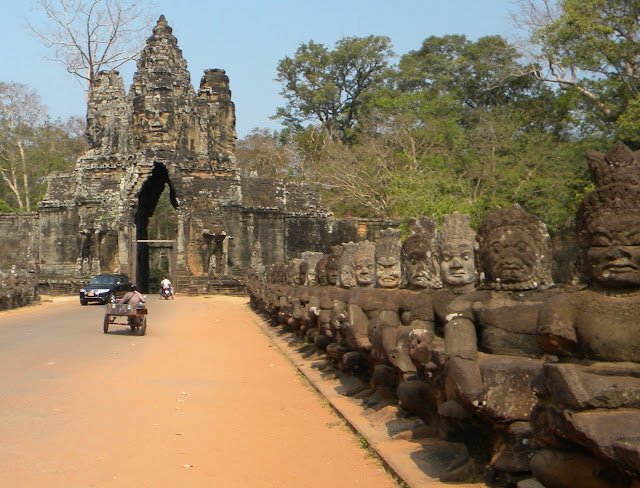 You'll see the Churning of the Sea of Milk depicted all over southeast Asia.  There's even what appears to be a fiberglass version, quite large and brightly painted, in the Bangkok airport's international terminal.