Los Angeles is an easy train ride from our home in San Diego, so one Sunday Jane and I walked to the Amtrak station a couple of blocks from our home and hopped the Surf Liner to Los Angeles. Once there, we relied on Lyft to take us to our hotel, the Sofitel on Beverly Avenue (click HERE), which may be in Beverly Hills but it's not Jed Clampett's old neighborhood.  There were a Target and a Marshalls nearby and the Beverly Center mall, complete with a Macy's and a Bloomingdale's directly across the street.
We weren't here to shop, though. We particularly wanted to see LACMA (the Los Angeles County Museum of Art) and La Brea Tar Pits, and we wanted to simply experience the city a bit, but without the main element of almost any L.A. experience -- a car.
From the Sofitel we could walk to the museum district, about a half-hour away on Wilshire Boulevard, where we  found the Los Angeles County Museum of Art (click HERE), La Brea Tar Pits (click HERE), and the Petersen Automotive Museum (click HERE).  At some point in the future they'll be joined by the Academy Museum of Motion Pictures (click HERE), which is building a Smithsonian-size structure at the corner of Fairfax and Wilshire, just across from the Petersen. There's at least one other major art museum in L.A., the Getty Center, which we visited a decade ago. At the time we thought the building was much more interesting than the art it housed. We have been told that LACMA is actually the much better museum; we didn't revisit the Getty.
LACMA is a campus of several different buildings and sculpture gardens and plazas adjacent to La Brea Tar Pits. It probably has more works by Picasso and Leger and Giocometti than most people have seen, though not necessarily those artists' best or most interesting works. Jane and I agreed on a favorite: "Metropolis II" by the late Chris Burden -- a roaring kinetic sculpture simulating a fast-paced, car-driven city, like Los Angeles.  Small cars race along curving and intertwining roadways as trains snake along on tracks.
La Brea Tar Pits gives visitors a chance to see first-hand the process of recovering and cleaning and cataloging bones from animals that died tens of thousands of years ago.  Don't skip the 3D movie about the animals of the Ice Age. I think this would be a great place for elementary-school-age kids.
Petersen Automotive Museum is not the sort of encyclopedic car museum that I was hoping to see. It's a random collection of movie cars, custom and concept cars, motorcycles and a few as-they-were production vehicles. I was disappointed that there were no Packards, Kaisers and especially Studebakers on display.
Aside from the museums, we wondered along the stars on Hollywood Boulevard. We walked more than nine miles on our one full day in L.A., going on foot to the museums from our hotel, then a Lyft to Hollywood Boulevard, and then another long walk back to the hotel.  (We also walked roundtrip between LACMA and our hotel on the afternoon we arrived.) We walked along major thoroughfares like La Cienga and San Vincente, through shopping areas like Melrose Avenue, and on quiet tree-lined streets with two-story apartment buildings and single-family homes. Turns out that sprawling L.A. can be surprisingly walkable.
And when we got hungry, we found very good places to eat and drink, mostly near our hotel:
Below are some snapshots from the trip. 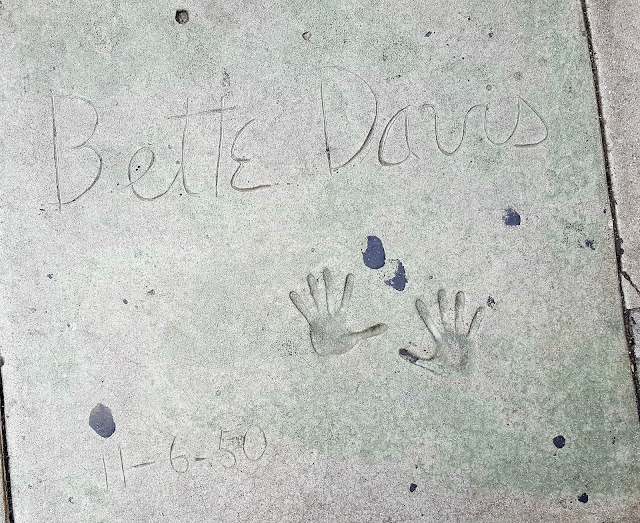 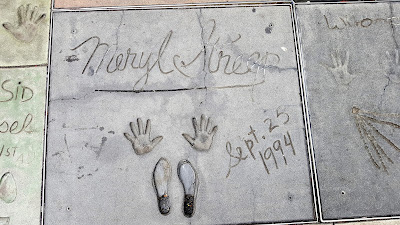