Southeast Asia: Images of the Divine

On trips to Europe, Americans inevitably end up in church after church, cathedral after cathedral. These buildings with their ancient histories, ties to an ancient religion, frequent ties to royalty and their centuries of accumulating great art, are quite naturally what most tourists want to see. It's the same in Southeast Asia with the wats, pagodas, stupas and other religious structures, most populated by images of Hindu gods or of the Buddha. 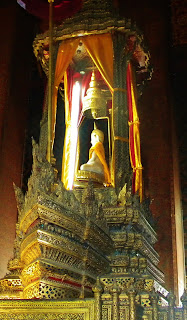 Below are some photos from our December 2012-January 2013 trip to Thailand, Laos, Vietnam and Cambodia.   (Keep scrolling, scroll some more, and then hit "older posts" for more photos and info on our progress through the region, ending with the great temples of the Angkor area in Cambodia.) 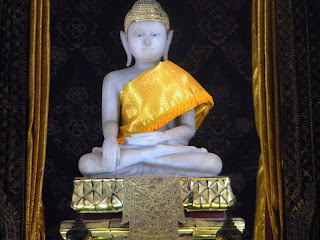 Above: Both photos are of the White Buddha, an off-the-beaten-track Buddha in Bangkok.  When we first went to the Grand Palace, an official-looking person told us the palace was "closed for prayers" and advised us to take a tuk-tuk tour and waved a driver over to us.  It cost only $1 and involved stops at shops where the driver would have gotten a commission had we bought anything. The temple with the White Buddha was the only real "attraction" we saw on this tour.  The only other visitor at this temple was a man from Singapore who had fallen for the same scam.  Nonetheless, a lovely Buddha. 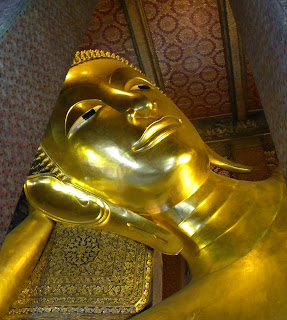 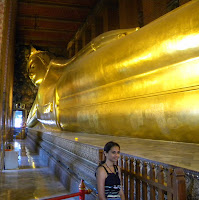 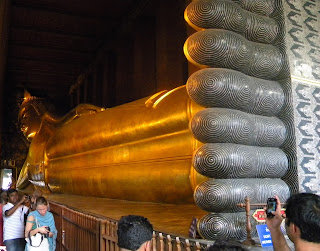 Left and above: The Reclining Buddha at Wat Pho, the largest and oldest temple in Bangkok. It dates from the 1500s.  This Buddha is 43 meters long and 15 meters high.  It's entirely clad in gold except for the bottoms of its feet,
which are oddly stylized.  Wat Pho is practically  next door to the Grand Palace.  The nation's revered  Emerald Buddha (it's really jade and is tiny compared to the golden ones) can be seen but not photographed at Wat Phra Kaew at the Grand Palace.

Above: Not all Buddhas are ancient.  New ones await buyers at a Buddha outlet in Bangkok.
Below: A decidedly older Reclining Buddha at Wat Arun, a giant stupa across the river from Wat Pho and the Grand Palace. 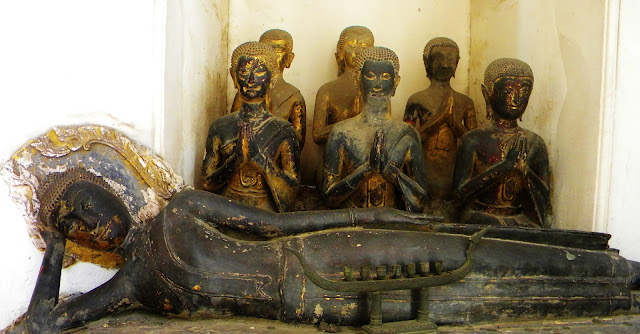 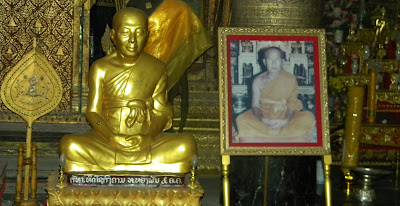 Left: In one of the many temples in Luang Prabang, Laos, a deceased revered monk is presented as the Buddha.

Below: This Buddha barely fits in its tiny, free-standing temple on the grounds of a wat in Luang Prabang. Notice the golden painting (stenciling?) on the walls. 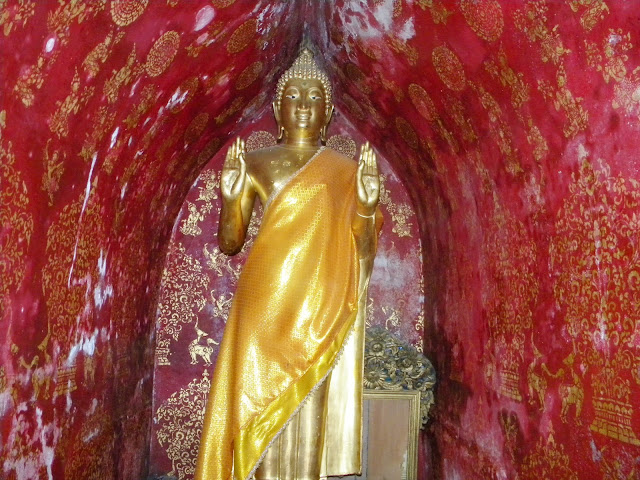 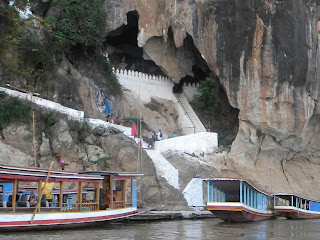 Left: One of the two Pak Ou caves, about 12 miles up the Mekong River from Luang Prabang.

Below: What draws visitors to the Pak Ou caves are the nearly countless Buddhas that have been left in them over the years.  Some are so covered with dust, dirt and cave debris that they're hard to see. Ones closer to the entrances to the caves are better maintained. 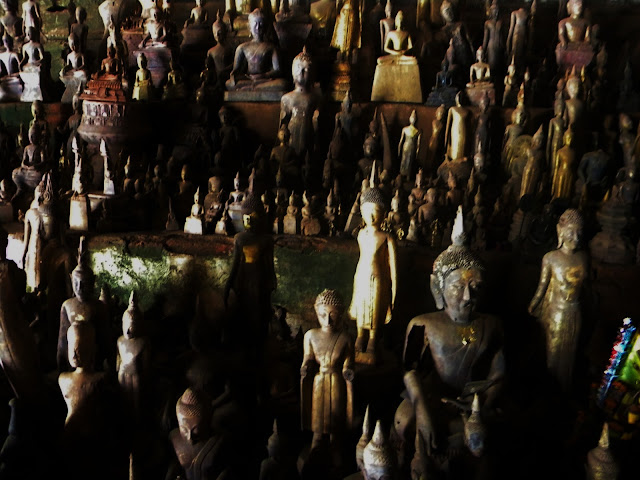 Below left: A Hindu god at My Son, Vietnam.   Below right: A shrine of some sort in Hoi An, Vietnam. 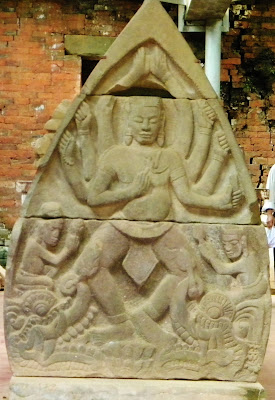 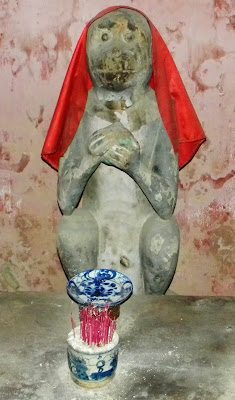 Phnom Penh, Cambodia, also has its share of shrines, wats, stupas and other religious buildings. 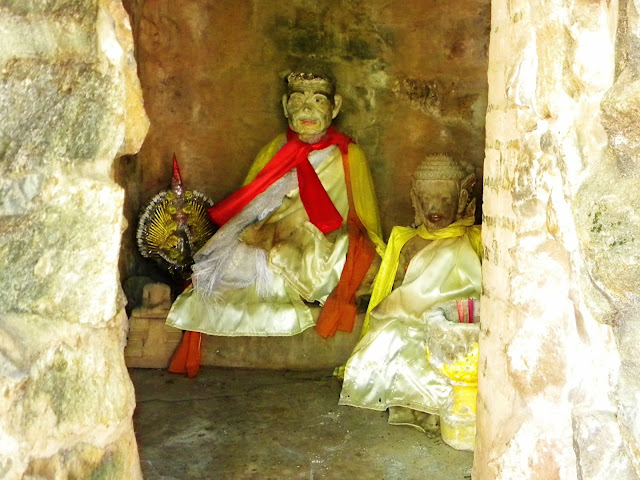 Above: A shrine tucked into a wall at one of the Phnom Penh's major wats.
Below: Statues on the grounds of the Silver Pagoda, so named because its floor is made of silver tiles. (Photography was not allowed inside the pagoda.) 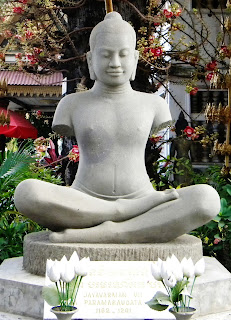 My photographs of Angkor Wat and other temples of that region are in earlier posts.  Keep scrolling and  hit "older posts" to see them.   Below: A group of Buddha figures at Pre Rup, one of the Angkor temples. 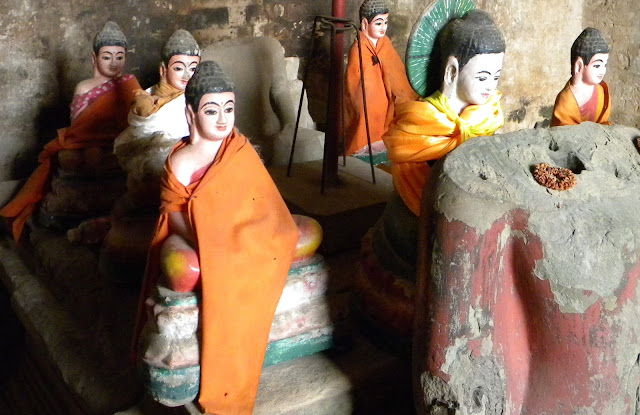