Forty minutes or so north of the much-acclaimed San Diego Zoo is the San Diego Zoo Safari Park in the hills and canyons near Escondido.  It started out as a breeding area for zoo animals but was eventually opened to the public, rebranded as a "safari park" and now is yet another Southern California attraction. (Click HERE for the Safari Park's website.)
Given the absence of some animals anyone would expect to see here -- hippos, chimpanzees, to name a couple -- I got the impression that the park is still a work in progress. I assume it will become more fully developed and more encyclopedic as time goes on. As it is, it's a major breeding zoo for rhinos and other threatened animals. Some animals born there have been introduced into the wild in Africa.
Jane and I are fortunate to have spent several weeks on safari in Botswana, Tanzania and South Africa (click HERE for postings about the experience). This park is really a zoo, although a very, very large one, much larger than the San Diego Zoo itself. Parts of it mimic the plains in Africa and the Australian Outback, and parts of it are simply displays of bats or skinks or other animals. Many kinds of African antelope share a large canyon with giraffes and other beasts. The size of the place, however, means that it's difficult to view many of the animals closely, though the park offers "insider" and other tours at an additional cost that get visitors much closer to the animals.
Conservation is a constant theme at the park, so it's disconcerting to see plastic straws distributed automatically with soft drinks and that the drinks are in plasticized but not reusable cups. This at a time when tiny bits of plastic are turning up in much of the seafood we eat.
We spent several hours at the park on Oct. 23, 2018, with Jane carrying a clipboard and answering questions about the park in a "scavenger hunt" as part of her training to be a volunteer at the San Diego Zoo in the city. I followed her around, offered her no worthwhile help, and took a few photos. 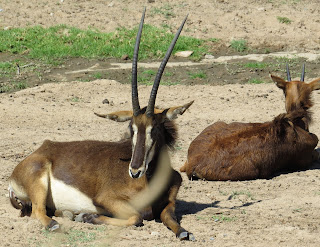