The Colosseum, the Forum, the Pantheon, St. Peter's Basilica, the Sistine Chapel ... I suspect those are things most people think of first when Rome is mentioned. You might also think of coffee, pasta, pizza and wine, the essentials of Italian cuisine.

When Jane and I started planning our 2018 trip to Italy and decided to rent an apartment for six weeks in Rome, we were hardly aware that palaces existed in the city and that they often can be visited. Now we look back at some palaces as highlights of our time there.

In Rome, "palazzo" can refer to an impressive public building -- many government offices and even the U.S. and French embassies are in palaces -- or it can refer to a large and grand private residence.  The French Embassy is in a palace built in the 1500s for the famous Farnese family.  The U.S. Embassy is in Palazzo Margherita, home from 1900 to 1926 of the Queen of Savoy.

It seems as if all the Renaissance (and later) families who built palaces included a pope, whose temporal political powers were used to enrich the families. The wealth is evident in Bernini sculptures, Caravagio paintings and rooms the size of hotel lobbies. Today, some of the grand private residences function as event spaces and as art galleries. Family members still live in at least two, the Palazzo Doria Pamphilj and the Palazzo Colonna, though in apartments that aren't included in whatever access the public is granted. At both palaces, the family art collections have remained intact, controlled from the grave by ancestors who decreed that if one painting is sold, the entire collection must be sold, and in one case, the buyer would have to be the Italian government (which already owns a number of palaces that function as museums or art galleries). Touring family-controlled palaces, we can see past collectors at work, specializing in landscapes for a generation, or maybe neoclassical sculpture.

Most palaces are rather plain on the outside, and thanks to air pollution, rather grimy. Roman aristocrats didn't need to impress the general public; they instead impressed important visitors with breathtakingly opulent interiors. Guides or audio tours are essential for explaining the framed art on the walls, the furnishings, and the gilded rooms that exceed anything Cinderella could ever dream of. Here are some photos (photos of paintings are usually large details, often shot at an angle to minimize reflected light): 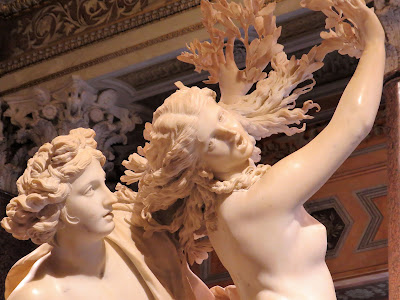