In planning our Portugal trip, we quickly knew we wanted to visit three cities: Lisbon, Porto and Evora. We also wanted to explore the Duoro wine region. Other stops were added to keep our driving days short and let us see more of this country that we were reading about.
Sortelha, for example, sounded great in Fodor's: "If you have time to visit only one fortified town, this should be it. From the moment you walk through Sortelha's massive ancient stone walls, you feel as if you're experiencing a time warp." Well, as much as we wanted to to do the time warp again, there's hardly anyplace to stay in Sortelha except for some cottage rentals.


For the itinerary of our April 2017 Portugal trip
and links to hotels, click HERE.


Fortunately, just 14 kilometers away is Belmonte, a more modern town about 50 kilometers west of the Spanish border. It has its own ruins of an old castle, along with a couple of intact ancient chapels. There were ruins even in our hotel, Convento de Belmonte. Crumbling stone walls were just outside restored areas of the old convent that are now used as a bar and sitting rooms. So, en route from Pesa da Regua, we stopped for a couple of hours to see Sortelha, which is about all that most people would require. Sortelha, a remote outpost near the Spanish border, was never as large as our other medieval town, Obidos, which in its heyday was an Atlantic port. Today Sortelha is a fairly quiet pile of stones with a couple of restaurants, one shop, and public restrooms. There are no admission fees, no guards, nothing to stop cars from driving right into the middle of the ruins (we and all but one of the other visitors when we were there parked outside the gate). There's also no first-aid for anyone who tumbles off a wall, so tourist beware. Leaving Sortelha, and having to ask directions because our GPS didn't know about the town 14 kilometers away, we made it to Belmonte in time for a late lunch.
Belmonte has an unusual story. In 1492, the Castilian Alhambra Decree outlawed the practice of Judaism in Spain, which held sway over Belmonte. The term "marranos" refers to Iberian Jews who were forced to convert to Christianity but continued to practice Judaism in private. (Belmonte is known to have had a synagogue at least as far back as 1297.) For more than four centuries, the marranos of Belmonte maintained their Jewish identity by marrying mainly among themselves, practicing Jewish observances in private, and observing Passover and Yom Kippur prior to the Jewish calendar dates to confuse anyone monitoring them. Only in the 1970s did they openly return to Judaism, The Belmonte Jewish community, which now numbers almost 200 (in a town of about 8,000), opened a synagogue in 1996.  There's also a small museum, in a former Catholic church of all places.
We didn't visit the synagogue or the museum, though, and instead used our one full day here to explore the nearby national park that contains the Torre, Portugal's highest mountain. Parque Natural da Serra da Estrela covers almost 400 square miles of mountains, alpine meadows, scrubby fields above the tree line and diverse forests below it.  We walked a while on the Beech Route, one of the park's lower-altitude trails. Narrow, twisting roads make ascending into the park and descending out of the park a thrill ride.
As for food in the Belmonte area, two places are worth mentioning. One is O Brasao (click HERE) near the castle ruins in town. We chanced upon it for lunch just after arriving in town, grabbing a table on the terrace out front. It turns out to be a very well regarded fine-dining restaurant. Jane asked for the same salad that she saw at the next table. I ordered wild boar stew, called "board hunter" on the poorly translated multi-language menu. Excellent, especially with an ice-cold Sagres beer.
The other place is where we stayed, Convento de Belmonte (click HERE).  In reading TripAdvisor reviews while choosing where we'd stay in Belmonte, Jane found a Convento guest who raved about the mushroom ice cream.  The day we arrived in Belmonte was Jane's birthday, so the ice cream was her birthday treat. I had creme brulee, served in a large volcanic stone. It's called "the world's best creme brulee" and I doubt many people would argue with that. Jane's ice cream, studded with what seemed to be candied mushroom bits, was delicious.
Even without wild boar stew and mushroom ice cream, I'd include Sortelha and Belmonte on a list of places to visit in Portugal. Take a look at my photos and decide for yourself: 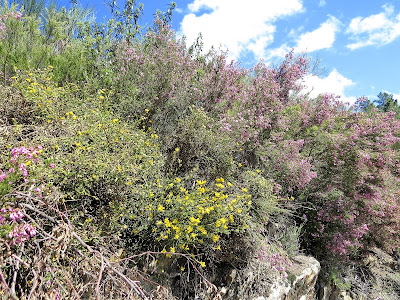