Morocco: Into the Sahara

The Sahara is such a place of mystery and fascination that when you're in it, it's hard to focus on what it really is: an amazing landscape of shifting dunes, strong winds and clear skies.
We had been in a desert at Ait Benhaddou, but it was a rocky landscape with a hard stony surface underfoot.  When we arrived at the edge of the Sahara, at our hotel Riad Madu, we found the flat landscape similar to that at Ait Benhaddou, more stony than sandy, but a few hundred feet away were Saharan sand dunes.
We stayed one night at Riad Madu, enjoying a fairly posh room with a great shower, and enjoying the hotel's large pool, though in March the water was a bit chilly for swimming. Late in the afternoon the next day, we were driven in an SUV a few kilometers to a staging area for camel treks arranged by Riad Madu. We climbed aboard our beasts -- they're sitting on the ground and then stand in two lunging movements that threaten to send the rider flying -- and were led into the desert by our guide. There would be a large tour group of Finns with us at the encampment, but someone thought we'd be happier by ourselves and not traveling with the other group.  Nice idea.
The encampment consisted of two groups of tents, each made  of wool with Berber blankets serving as door flaps. Berber rugs were inside and outside the tents, used as sidewalks connecting guests' tents with the large dining tent. Dinner, a host of preliminary dishes followed by an avalanche of lamb, was served at nine. Afterward camp workers formed a band to play Berber music and to encourage dancing, in which some of the Finns participated with great energy.
Our tent was equipped with an en suite bathroom complete with a hot-water shower, and there were even electrical outlets for recharging phones and cameras. None of the furniture was what anyone would associate with camping. We had a real queen-size bed, comfortable chairs and ottomans, and plenty of room.
The next morning, we awoke at dawn along with everyone else to walk out and see the sun rise over the dunes. The air is too try for the sunrise to be spectacular, but what was spectacular was the way the low-angle rays spotlighted the dunes. After breakfast, we chose an SUV rather than a camel to get us back to Riad Madu, where a driver was waiting to take us  to Meknes, our next destination. 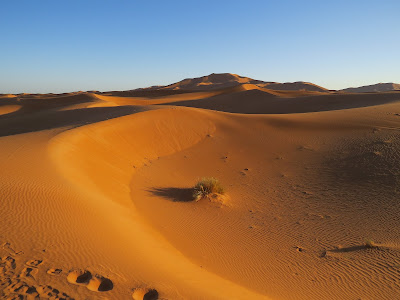 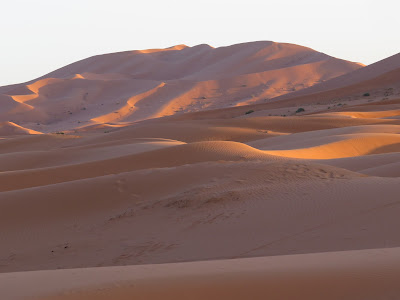 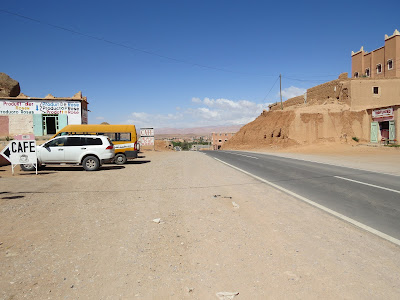