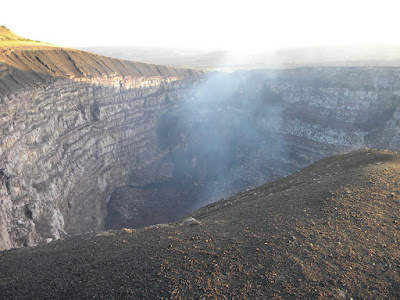 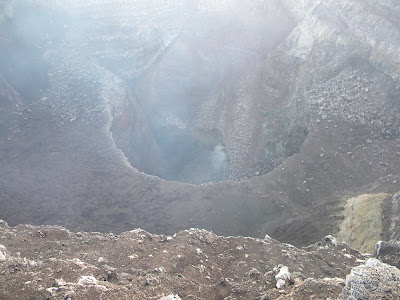 Atop Masaya Volcano, northwest of Granada and southeast of Managua, Nicaragua, the visitor is rewarded by the smell of sulfur. This active volcano, which we visited at sunset with Tierra Tour out of Granada (CLICK HERE), has a huge crater, shown in the top two photos here, that emits noxious gases. Sometimes after sunset red molten lava is said to be visible at the bottom, but it wasn't on the night we were there.

The third photo is from the top of another volcano, Mombacho, which is also an easy half-day visit out of Granada.
Masaya's rocky top and deep crater make it seem bigger than it is. Masaya is a mere 2,083 feet high.
From Mombacho, one can see the city of Granada and a chain of tiny islands in Lake Nicaragua. Mombacho, at 4,409 feet, is visible from the streets of Granada.
Fortunately for the old and the lame, there are roads right up to the tops of these two volcanos. Once you're there, though, there are quite challenging trails that take you to a peak above the Masaya crater and actually into the jungle-filled Mombacho crater.
The bottom photo is of Concepcion, an active volcano on Ometepe Island. Concepcion is 5,282 feet high. The photo is taken from the bar at Totoco Eco-Lodge, which is on the slopes of 4,573-foot (and dormant) Maderas Volcano.
There are no roads to the tops of Ometepe's two volcanos, although there are trails. The trail to the top of Maderas passes through a plantation that grows coffee in the shade of the jungle, and the coffee workers' paths intersect with the path to the top, making it easy to lose one's way. The close-up photo of a howler monkey in an earlier posting was taken on this trail. 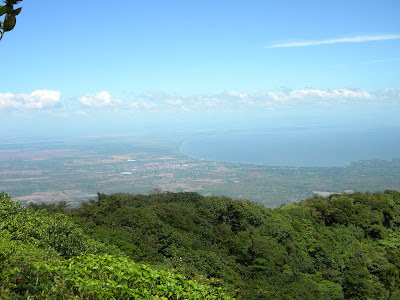 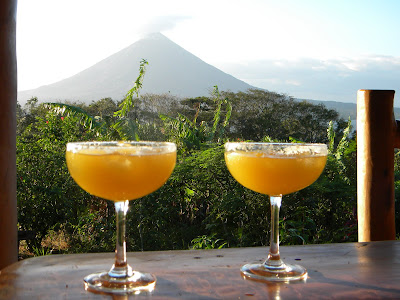