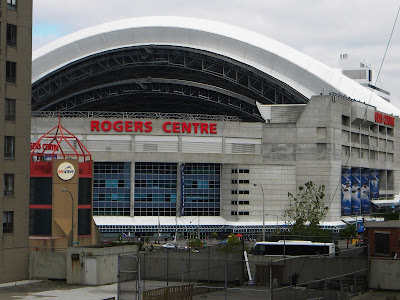 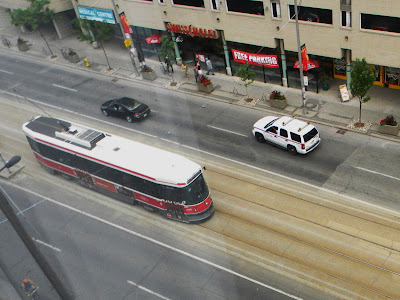 What do you think of when you hear someone mention Toronto? I know it's a large city, that it's used in movies as a stand-in for New York, and that it's not Montreal, the other big city and the one where people speak French.

My wife and I spent three days there in June 2011 on business. It was my first visit to Toronto -- we were there in connection with our new Inuit art gallery -- and I had almost no preconceptions.
I was pleasantly surprised to find that is has many interesting neighborhoods, intriguing restaurants, good public transportation, etc. It's also the main marketplace for Inuit art, so there are important Inuit collections in museums and many, many galleries to visit.

We stayed at the Radisson Harbourfront hotel on Queens Quay West. Unfortunately, we booked too late to get a room with a harbor view -- our window looked down on the street with its convenient streetcars and north to the nearby Rogers Centre, where the Red Sox were playing a weekend series with the Blue Jays (and that's why the hotel was full).

There's little to recommend this hotel and many petty things to complain about -- such as the low water pressure in the old-style not-terribly-clean tub/shower with a shower curtain that did not contain the water. It's within walking distance, though, of many downtown attractions, and the streetcar system can take you where your legs won't. We parked in the adjacent garage and didn't use our car at all while we were there.
Two of the restaurants we visited are worth mentioning: Foxley (416-534-8520, 207 Ossington Avenue) and Black Hoof (416-551-8854, 928 Dundas Street West). Neither takes reservations and both are small and crowded. Each offers offer an unusual small-plates menu. I bet that at either you'll have the chance to try something you've never tasted before.
At Foxley, we had wild Nunavut arctic char ceviche (the fish was not chopped as it would be in a South American ceviche), lamb and duck prosciutto dumplings, grilled spiced venison wrapped Vietnamese-style in la lot (wild betel) leaf and tea-smoked sturgeon with sauteed fiddle head ferns (which my wife, Jane, especially liked). The venison and the sturgeon were the standouts, but all was very good. With wine, this was a $140 meal for two.
The next night, a Sunday, we tried Black Hoof, which is in roughly the same shabby-chic-trendy-moving-up neighborhood and was recommended by the bartender at Foxley. The charcuterie is made in house; our plate included thin slices of smoked or dried duck breast, an excellent salami, a good sopressa and very thinly sliced horse salami. Yes, horse, and it was very good. Other dishes we tried included miniature pork tacos (very good), crispy sweetbreads with asparagus (excellent) and sauteed pork belly (who knew pork belly could be so good?). The service bordered on excessive: new dishes and flatware with each dish and a parade of people to keep the wine and water glasses full. With wine, this was a $160 meal for two. And it could be paid for only in cash or with a Canadian debit card.
Now when someone mentions Toronto, I'll think of it as the Carnivore Capital.