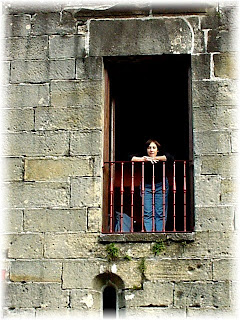 The Basque region in Spain, at the western end of the border with France, probably strikes visitors as more "foreign" than other parts of the country. For one thing, the two languages there are Spanish and Basque, not Spanish and English. If you make the pilgrimage to the Guggenheim Museum in Bilbao, you're in Basque Country, and you should see more of it than just Bilbao (which, besides the museum, has wonderful riverfront promenades, a sprawling, multi-level public market, and designer hotels).
Basque cuisine features a lot of seafood, but there are also cured meats and many lamb dishes. Vegetables, however, are often overcooked to the point that they resemble canned goods. Asparagus is on a lot of menus, and usually comes mushy and drowning in olive oil.
But there are places with amazing food.
Rent a car and drive to San Sebastián on the coast. With more Michelin stars per capita than any other city (including Paris), it's heaven for foodies. Arzak is probably the most famous of its celebrated restaurants.
Up the coast a bit and just across the Bidasoa River from France is Hondarribia, where pintxo bars and their tapas-like dishes are attracting international attention. Ingrid K. Williams discussed Hondarribia as a dining destination in the Aug. 1, 2010, New York Times. Here's a link: http://travel.nytimes.com/2010/08/01/travel/01Next.html?hpw. The town, also known as Fuenterrabia in Spanish, is home to one of Spain's most celebrated paradors, Parador El Emperador. Click on the title of this posting for a link to the parador, where you can stay in centuries-old chambers that look like movie sets. We stayed in a room that would have held a small airplane. One of the room's large windows is shown in the photo.
Posted by Steve Bailey at 8:31 AM