Virginia is for ... what, exactly? 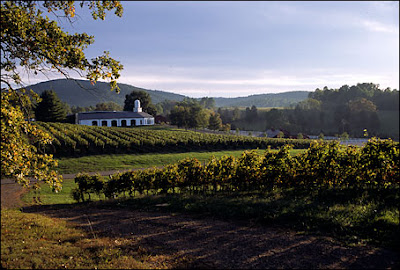 I'm not a huge fan of Virginia. Sure, it has some pretty scenery. That's a vineyard at Barboursville, right, about two hours from Washington, D.C. And there are loads of charming small towns, good restaurants and beautiful drives. Both Washington's Mount Vernon and Jefferson's Monticello are in Virginia.
What I don't like about Virginia is its political climate. It's one of the states that is suing to prevent implementation of the Affordable Care Act, better known as Obama's health reform bill. The current governor and attorney general have also done everything they can to knock down anti-discrimination policies that benefited gay people. Overall, it's a state that in some ways seems determined to return to the 1950s if not the 1930s.
That said, not everyone there is politically regressive. The state went for Obama in 2008 and given rising voter remorse about electing so many Republicans in 2010, there's a chance it will stay blue in 2012. I don't think visiting Virginia is on a level with taking a golf vacation to Haiti during the Duvalier regimes.
If you're a lover, Virginia may well be for you after all. Here are a couple of the state tourism board's web sites. CLICK HERE for wine travel; CLICK HERE for autumn travel ideas.
Posted by Steve Bailey at 5:01 PM 3 comments: