One of my oldest friends, a fellow Ole Miss alumnus, has been living for 14 or 15 years in Ajijic. He moved there from San Francisco. Like me, he has spent much of his life as far away from our roots in the Magnolia State as possible. Jane and I had time off over Thanksgiving from helping out with our granddaughter in San Diego and spent a week with my friend, Ralph, in Ajijic. It's  pronounced ah-HEE-heek.

Read my column about expat retirees, including one in Ajijic. Click HERE.

To reach this small town, we flew on the bare-bones Mexican airline Volaris from Tijuana (using the Express Border Crossing bridge to walk into the airport after parking our car on the U.S. side) to Guadalajara. Ralph picked us up for the half-hour ride to Ajijic. Although Ralph has a lovely Spanish Colonial-style home with a guest room and a swimming pool, we stayed at a nearby bed and breakfast (Casa Tres Leones, click HERE for website) thanks to my allergies and Ralph's two dogs and two cats.

Ajijic markets itself as an affordable retirement haven for Americans and Canadians, and the town of about 12,000 has more than 1,000 full-time expat residents. Another 700 or so have winter homes there. We saw car license plates from several U.S. states and Canada. With an elevation of about 5,000 feet, Ajijic has a constant spring climate, though rainy and dry seasons break up the year. The average year-round temperature is 72 degrees Fahrenheit. The town is on the northern shore of Lake Chapala, Mexico's largest lake at about 420 square miles. It's surrounded by mountains that are part of the Sierra Madre range. The lake moderates the temperature in waterfront communities like Ajijic, making it warmer during the "cold" months and cooler during the summers. Although it's very scenic, the lake's questionable water quality discourages boating, swimming and fishing.

For such a small town, Ajijic has a great variety of restaurants, from small traditional Mexican eateries like Chile Verde (click HERE), which is popular with locals and expats alike, to more sophisticated places like Pale (HERE), a Spanish place where we ate three times. Our last meal was an off-the-menu rabbit and chicken paella for three. The young co-owner and chef said it was the first time he'd made rabbit paella since opening the restaurant 18 months ago. It was delicious.

The shopping scene is not so bright. We had thought that we'd do a good bit of our Christmas gift-buying here, but what we wanted -- handcrafted baby clothes, blankets and other easy-to-pack textiles -- were very similar to Mexican goods sold in San Diego and not exactly bargains. We came home with very little despite having made it to the town's quite good Wednesday street market and having gone into most shops in the "Corazon de Ajijic" more than once. Some of the local art, however, was very interesting and well priced, but hard to carry on an airplane. The town is something of an art colony, and Ralph has filled his house and garden with wonderful works by Ajijic artists.

In addition to eating and drinking too much, we three went on several excursions. The first was to Mazamitla, a small town at about 7,000 feet in the Sierra del Tigre mountains on the other side of the lake. Another was to Teuchitlan, a couple of hours away on the other side of Guadalajara, where we visited the Guachimontones, circular pyramids more than 2,000 years old. We also went to Guadalajara where we had lunch in a neighborhood cafe near the center of the city, which is the second-largest in Mexico. Another outing was a drive further east along the lake through a couple of indigenous villages. The condition of some roads in Jalisco are excellent by any standards, and others show why Ralph and so many others there drive Jeeps or similar vehicles.

Here are some snapshots from Thanksgiving week, 2018: 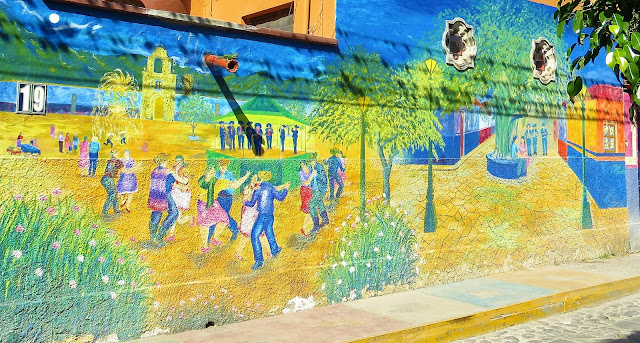 Posted by Steve Bailey at 4:12 PM No comments: