Here are some snapshots from Phnom Penh, the surprisingly pleasant (especially given its horrific history) capital of Cambodia.  It's home to almost two million people. 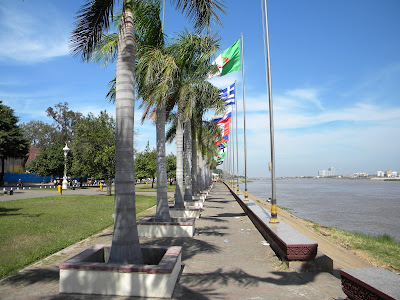 Left: The promenade along the Tonle Sap River, which connects Tonle Sap Lake (see posting on Siem Reap) and the Mekong River.  In fact, it joins the Mekong River a few hundred yards south of here. Flags of dozens of nations, including the United States, are displayed along the riverside. This is a river whose flow reverses -- sometimes draining the lake into the river, sometimes going the other way. 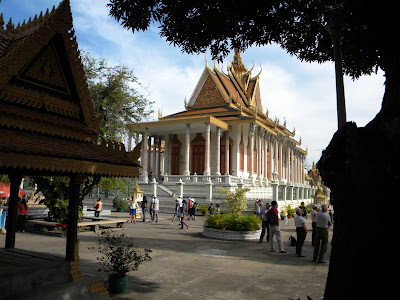 Right: The city's famous Silver Pagoda, named for the silver squares used as flooring. It's home to what's known as the Emerald Buddha, which examination determined is carved of jade.  There's also a solid-gold Buddha.  All over Cambodia, very poor people in very poor villages pour as many resources as they can into elaborate temples. I guess that's a national trait. 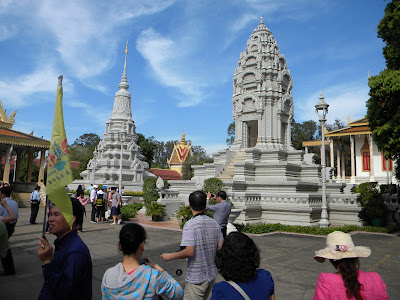 Left: The grounds of the Silver Pagoda. It's adjacent to the Royal Palace, which is usually open to the public but was closed in January 2013 when we were there as the nation mourned the death of former King Sihanouk. One of his sons became king in 2004 when he abdicated. 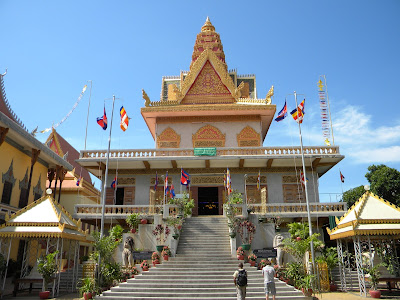 Right: OunaLom Pagoda, one of the city's handful of other major temples.


Below: A sign pleading for children to be calm during their visits to OunaLom. 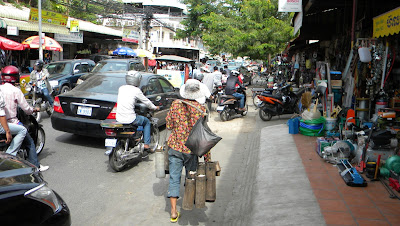 Right: A typical street scene.  Notice how there's no real sidewalk.  Even in places that have sidewalks, they're taken oven by vendors and by parked motorcycles and motor scooters. Pedestrians inevitably end up walking in the streets. 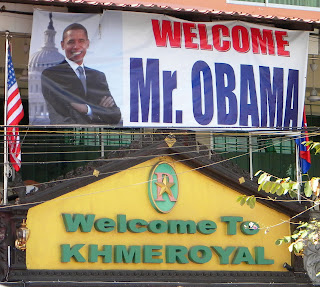 Right:   President Obama, after his strong re-election victory, went in November 2012 to Southeast Asia.  Specifically, he attended the East Asia Summit in Phnom Penh. Two months later, signs welcoming him were still displayed there.  We saw no signs celebrating the visit of the premier of China, who was also there.

Below: A tuk-tuk.  Elsewhere in Southeast Asia, tuk-tuks are three-wheeled motorcycles with, usually, one seat for two passengers.  In Cambodia, they're motorcycles with trailers that can carry four passengers. Most tuk-tuk rides are $2 or $3 -- and they are indeed priced in U.S. currency, which is used throughout Cambodia alongside its own riel. 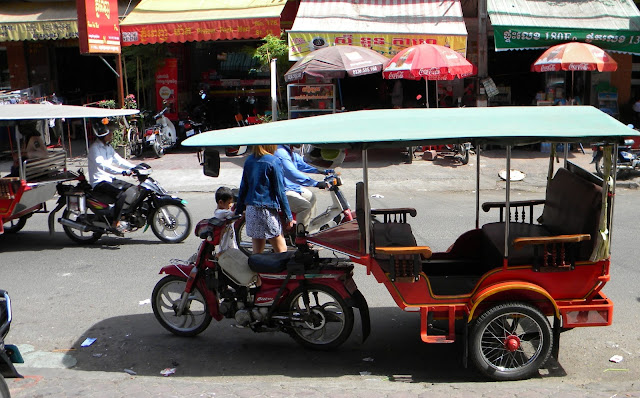 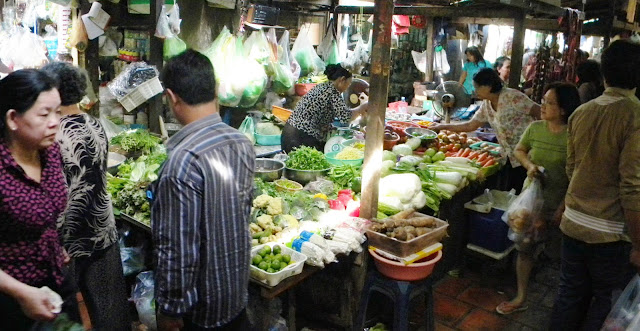 Above: The sprawling Russian Market.  This is where the locals shop for clothes, food, auto parts, plumbing supplies, you name it.   Not much for tourists here, but it's where you can see how the people live.  Below, a fabric seller at the market. 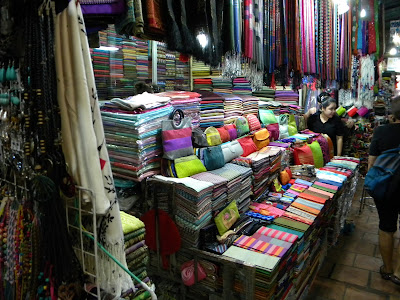 Below: We saw these displays of drying meat (raw pork, I think) near street food vendors in Phnom Penh, the one city where we did not want to try street food.  I apologize that the many flies aren't visible in the photo.

Posted by Steve Bailey at 3:58 PM No comments: Links to this post