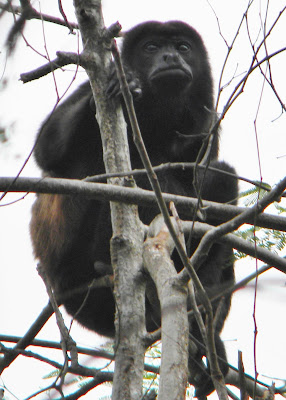 Like lots of other tropical countries, Nicaragua has jungles and monkeys. Three kinds of monkeys, to be exact: white-faced capuchin, Central American spider monkey, and the manteled howler monkey. Unless you spend all your time in the cities, you're likely to encounter monkeys.

We saw spider monkeys only at the park office at the Indio-Maiz Biosphere Reserve where a mother and an infant lived more or less as pets. The only capuchin we saw was on a leash on someone's front porch in the village of Balgue on Isla Ometepe.


Howler monkeys, however, were wild, free and everywhere. We saw them at Sabalos Lodge (bottom photo) on the Rio San Juan. We saw them on the slopes of Volcano Maderas on Ometepe (middle two photos). And we saw them at Morgan's Rock (top photo), a Pacific Coast resort north of San Juan del Sur.


You may not always see howler monkeys, but it's hard not to hear them. They're loud, one of the loudest animals on earth, with an unearthly howl that can be heard for over a mile. On our first night at Sabalos Lodge, in an open-air treehouse cabin, we felt like 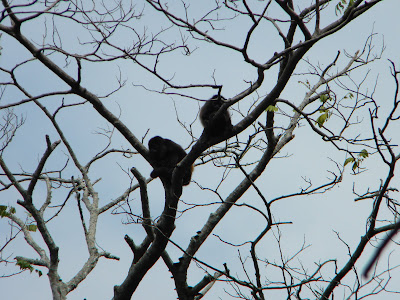 we were surrounded by creatures from Jurassic Park. They howl but they don't otherwise bother people. They stay high in trees, jumping from one treetop to another often with a baby clinging to an adult's back.


Often all that's visible are dark silhouettes high in the trees, but sometimes they're close enough that you can see the brown fur on their backs.


At Sabalos one afternoon, we were in our cabin when we realized that the monkeys we had seen in a riverfront tree close to the front of our cabin were moving away from the river.


"Ping, thud, plop," we heard as the monkeys passed over our metal 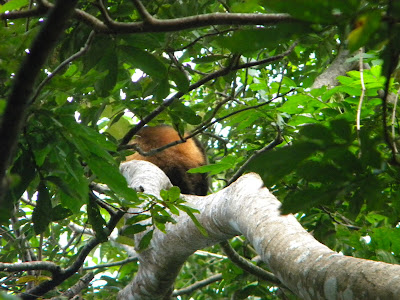 roof. Then there was a less than pleasant barnyard odor.


We think we got dumped on by family of monkeys. 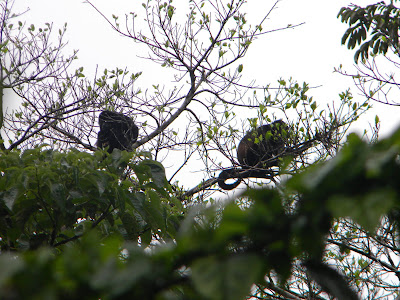