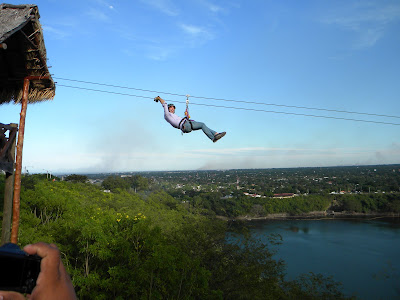 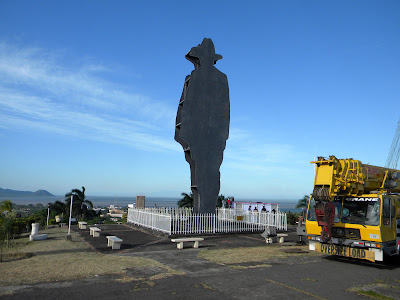 Managua, Nicaragua's capital city, is a dirty and unpleasant place.

Eternally vulnerable to another quake (there had also been a major quake in 1931), it's largely a city of one-story buildings, open street drains that the unwary can fall into, horse-drawn carts and
.

overcrowded buses that were probably school buses in the U.S. decades ago.

Knowing all this, we planned to stay in Managua only our first night in Nicaragua, waiting for a flight the next day to San Carlos, and our last night in Nicaragua, since we had an 8 a.m. flight back home.
We did find nice restaurants in the area where we stayed both nights, the Los Robles district, which has a number of hotels, including a multistory Hilton. We stayed first at Los Robles (CLICK HERE) which was in the process of putting in a very nice looking pool area and patio.
Our last night in Nicaragua was at the nearby Casa Naranja (CLICK HERE). Of the two hotels, I would have to recommend Los Robles over Naranja, though both are nice. The common courtyards and pool area at Los Robles are much nicer than those at Naranja, and the rooms are bigger and brighter. But both are well-located, have helpful, English-speaking staff and can help arrange airport transfers.

I didn't carry my camera around in Managua (it's a city with few Kodak moments), but here are two shots from the highest point in the city, the Parque Historica.

At the top is a fellow zip- lining above the Laguna de Tiscapa, the water-filled crater of an extinct volcano. The other is a giant silhouette of Sandino, the ruthless freedom-fighter whose name was appropriated by the Sandinista guerillas.

Not shown but nearby is a monument to the people killed in the 1970s uprising against the Somoza dictatorship. It bears a poem called "Epitaph for Adolph Baez Bone" by Ernesto Cardenal. Here's an English translation by Andrew McKenna:

They killed you and / didn't tell us where / they buried your body.
But ever since that day / the whole country/ has been your grave.
or rather / in every part of the / country that
does not hold your body / you have risen again.
They thought they had / killed you with their order / of fire!
They thought they / were burying you
And what they were doing / was planting a seed.

Posted by Steve Bailey at 6:08 PM No comments: Links to this post 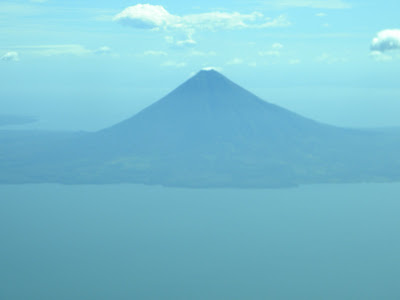 Nicaragua is a startlingly diverse country -- tropical rain forests, soaring volcanoes, mountainous cloud forests, big cities and tiny isolated communities. Jane and I got a taste of all these during our January 2012 visit.

I'll be writing more later about each place we visited: Managua, the Rio San Juan, the Solentiname Archipelago, the Selva Negra coffee plantation, the colonial city of Granada, Ometepe Island, and San Juan del Sur.
In the meantime, here are some photos. From the top:
-- Concepcion Volcano on Ometepe Island (seen from the air on a fight over Lake Nicaragua).
-- The small La Costena airplane that took us from Managua over Lake Nicaragua to San Carlos, where Lake Nicaragua drains into the Rio San Juan.
-- The balcony of our treehouse cabin at Sabalos Lodge on the Rio San Juan, a neat eco-lodge with a focus on helping the local community, which is very poor.
-- The Rio San Juan as seen from El Castillo, an old Spanish fort built above rapids on the Rio San Juan. It was meant to help protect Spanish shipments of gold from Granada to the Caribbean, where the treasure was transferred to larger ships to be sent to Spain. 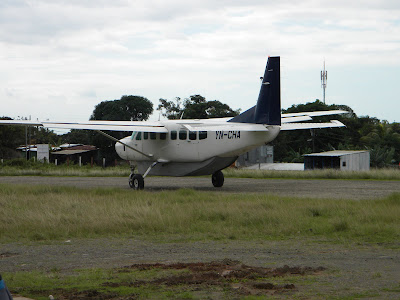 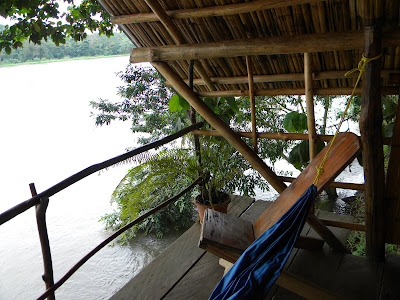 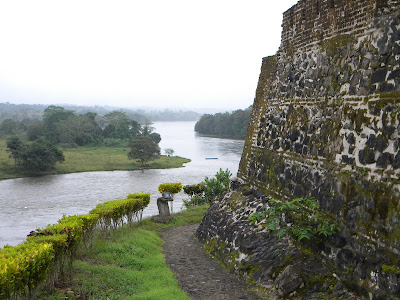 Posted by Steve Bailey at 3:22 PM No comments: Links to this post