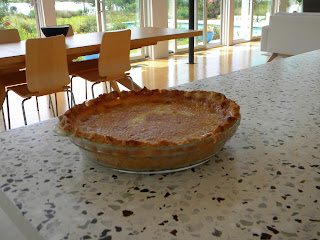 This has nothing to do with travel.  It's about a pie made by our friend, the writer/baker Frank Starr who has a weekend home across the cove from us.  It's called a sugar cream pie.  More specifically, a Hoosier sugar cream pie.  Frank's a Hoosier who left Indiana long ago and seems none the worse for it, though he retains an interest in many things Hoosier, including pie.  He wrote about this pie last year on his elegant blog.  Click HERE for his blog, then scroll way down to read about the pie. 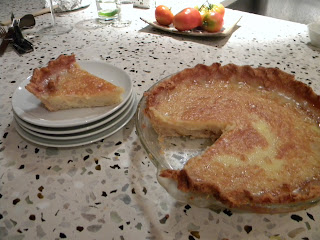 So why am I mentioning this?  When I discovered the pie on his blog, I hinted rather rudely that such a pie was something I'd like to taste.  Yesterday, Frank called. He had baked me a pie!  Although the recipe reportedly dates back to 1816, the pie Frank produced was quite fresh.  The ingredients are cream, sugar, a little butter and a little flour.  It's not a light dessert.  It's a rich and delicious dessert.  We had it at dinner last night.
When I ran into Frank this morning, I thanked him for the pie.  He let slip -- and his wife, Jan, also mentioned it -- that today he was baking a cherry pie.  Bet he's using fresh cherries.
Boy, that sounds like another good pie!  Guess it would be rude to come right out and ....
Posted by Steve Bailey at 1:45 PM 2 comments: Links to this post