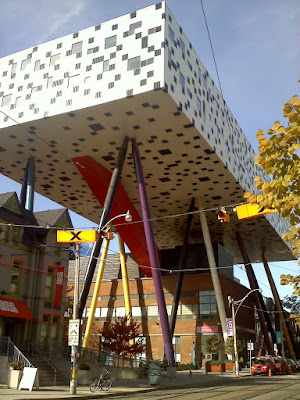 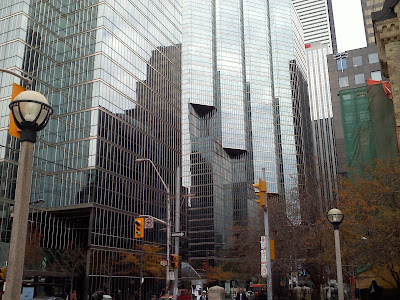 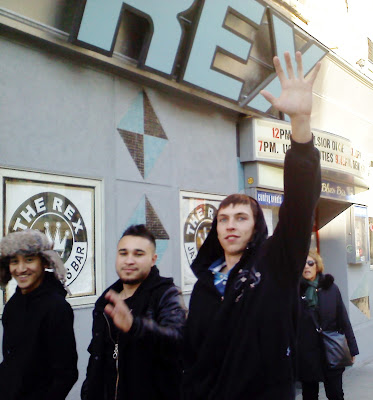 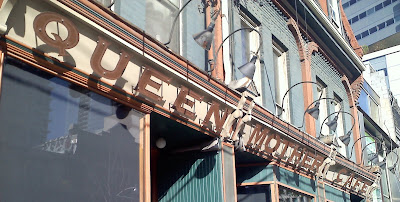 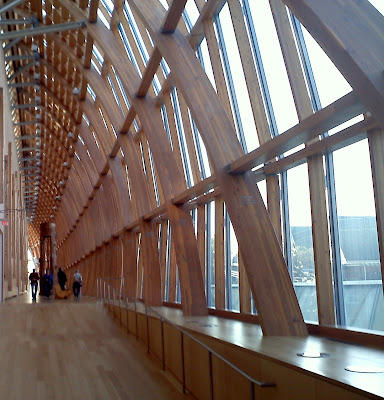 A November 2011 trip to Toronto was very different from our June 2011 trip. For one thing, we flew this time. Air Canada's Jazz service flies a turbo prop on the 90-minute trip between Baltimore Washington International airport and Toronto's Pearson International. We also stayed in the heart of downtown, not going as far west as some of the restaurants we visited in June, and not using the city's neat streetcars nor its modern subway. We walked everywhere from our fairly conveniently located hotel, One King West.

King Street is the financial district. Our hotel was at the corner of King and Yonge, which divides downtown into east and west. To the east on King was the auction house that was the purpose of our visit, an auction of Inuit art at which we were fortunate to win some interesting inventory for our Inuit art business, BaileyMajorArt.com. Head west on King, cross the major artery Spadina, and you come to Crush, an excellent if rather pricy wine bar.

Queen Street has loads of Indian Restaurants, though no one would confuse it with Brick Lane in London or East 6th Street in Manhattan. It also has the Rex, a jazz and blues bar with a handful of hotel rooms upstairs. Another favorite on West Queen Street is the Queen Mother Cafe, which can have long lines at breakfast but is also a great choice for lunch. The Bloody Caesar is a generous take on the Bloody Mary with clam juice.


Dundas has a string of small Chinese restaurants and the Art Gallery of Ontario, a major museum. It's basement has a glass wall allowing visitors to see its shelves and shelves of stored Inuit carvings. We caught an exhibition on Marc Chagall and the Russian avant garde. It also has a large gift shop that stocks a number of good books on Inuit art, a stylish but friendly bar, and a large restaurant.

Jane and I were lucky in that the weather was perfect for walking during this visit. We also benefited from a very slightly weaker Canadian dollar -- something like 98 U.S. cents would buy a Canadian dollar. Back in June, it went the other way.

Though we had no amazing restaurant experiences and our hotel was decidedly unremarkable, we still had a great time. This may have been a business trip, but there was a lot of pleasure.
Posted by Steve Bailey at 6:53 PM 1 comment: