If you've ever huffed and puffed your way to 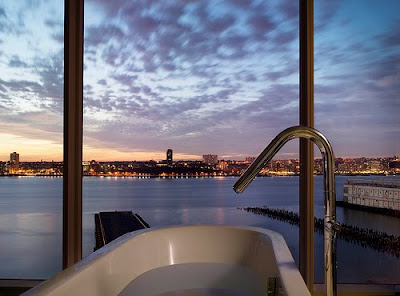 the top of a mountain or even a decent overlook spot, you know that a great view can be worth the effort. There's a hotel in Chile that proves the point. From Santiago, you take a four-hour flight south to Punta Arenas, where the hotel van will pick you up for the five-hour drive (half of that time on a dirt road) to the hotel on the shore of Lake Pehoe in Chilean Patagonia. The hotel is the 50-room Hotel Salto Chico. Click here to see what people say about it on TripAdvisor.
I've been to Patagonia, but only the drier Argentinian part. To the west, across the Andes, the Chilean side is wetter and, I'm told, much more scenic. Photos such as the one here, of a room at the Hotel Salto Chico, seem to prove the point. This place looks like a comfortable (let's say it -- posh) base for any exploration of Chilean Patagonia. It was brought to my attention by the Most Perfect View, a just-launched web site promoting hotels with what most people would consider perfect views.
These hotels are not all in unbearably remote places. There's the Standard NYC, sibling to celebrity magnets in Miami Beach and Hollywood, that's conveniently accessible at Washington and 13th streets in Manhattan. That puts it between the West Village and the Meatpacking District. Its views, seen here from a bathtub, look west across the Hudson to New Jersey. Not Patagonia, but not bad, especially at sunset.
Posted by Steve Bailey at 3:35 PM 1 comment: Links to this post