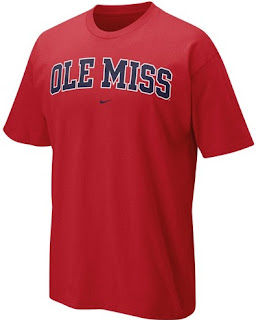 There's an interesting article in the Travel section of the New York Times for Sunday, Oct. 16, 2011. The article, by Dwight Garner, is nominally about a football weekend at Ole Miss, but it's really a portrait of the campus and the town of Oxford, Miss. I have long thought that the more one knows firsthand about a subject, the more inaccuracies one will see in any newspaper article on that subject. That's not the case here.


Of course, the Oxford and the Ole Miss that I knew firsthand no longer exist. I entered Ole Miss as a freshman from Jackson, Miss. (hey, Dwight, try to wring a travel article out of Jackson), in 1969 at the height of the Archie Manning era and left with a B.A. in journalism in 1972. My last semester, fall of 1972, I worked at the local paper, the Oxford Eagle.

I've been back to Oxford three times since. Once in the mid-90s with a former roommate and his wife; once with my kids around 2002 or so, and once in 2008 with my wife, Jane. The last time was to do an article about Oxford as a weekend-home destination for the New York Times. If you click on that link, please be assured that I also wince at the headline, which should say the streets are lined with magnolias, not paved.

Like Dwight Garner's article, mine begins with the importance of Faulkner to the town's current cachet. And bookstore owner and then-Mayor Richard Howorth. My article suggests Oxford as a weekend destination for people who already have a reason to want to go there: kids in school, old-school ties, affinity for Southern culture, etc.

His article touches on something I hear a bit about (thanks to a couple of nephews who went to Ole Miss, not to mention their mother and two uncles): that Ole Miss no longer cares about football. The party is more important. When I was a student, everyone seemed to take the football very seriously, the parties in the Grove were relatively modest (no chandeliers, no fine china that I recall), and after a loss, there would be a lot of profoundly sad people. I found out just how seriously people took football when I wrote an editorial in the student newspaper calling for the end of varsity sports there -- I was upset that athletes had air-conditioned dorms and I didn't. I was the object of some abuse for a while, but it wasn't as if I had suggested banning Bourbon-soaked picnics in the Grove.

Today's focus on parties? Just shows that, even in Mississippi, progress is possible.
Posted by Steve Bailey at 7:37 PM 2 comments: Links to this post