Canada: Montréal on the Run 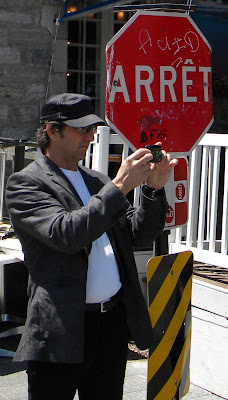 Perhaps if we had been there longer than two nights, I would have fallen for Montréal the way most people seem to.

My Francophile daughter liked the city so much that she almost ended up going to college there.

As it was, my first-ever visit there, in June 2011, was sort of a disappointment.
My wife, Jane, did find us a cool hotel, the Gault (click HERE for its English-language web site), which is in the old quarter of the city and just a couple of blocks from the lively waterfront (where the red high heels were walking). Our very sleek room was "open format," which meant that everything but the toilet was out in the open, though there was a floor-to-ceiling curtain that could be drawn to separate the sleeping/living area from the bathing/dressing area. Although the area rug in our room needed a good cleaning, I'd recommend the hotel for its location and its friendly staff and would stay there again. But I'd ask for a room on a higher floor. Ours was on the first floor (which, in U.S. terms, would be the second floor) and had no view.
For one lunch, we took a city bus many, many blocks north of the waterfront to the Plateau-Mont-Royal neighborhood and Om, a Tibetan-Indian restaurant (4382 St. Laurent; 514-287-3553). It was friendly, inexpensive and served good food. The shrimp, veggie and cheese momos (steamed dumplings) and the steamed bread were particularly good. I also enjoyed sha ka tsa, a beef dish. Jane had a soup with noodles and chicken.
We had two dinners in Montreal, one at a "new Canadian" place in a basement and one at a large Chinatown eatery. L'Orignal (click HERE for web site) was busy midweek and was quite expensive with entrees as much as $40. And although the restaurant's name means moose, the menu was no more adventurous than lamb sliders as an appetizer. L'Orignal has the advantage of being just a few steps from the Gault, but I'd not go back.
The Chinese place was several blocks north of the waterfront. The walk may have taken 20 minutes. It was La Maison Kam Fung (click HERE for web site) and it's upstairs in a Chinatown shopping complex. The sprawling dining room has large windows and loads of fast-moving servers. We had steamed dumplings, crispy spinach, Peking duck and a beef dish. Way too much food, as the waiter who took our order told us. But the total bill was less than an entree at L'Orignal. For the most part, the food was what you'd expect at any big Chinatown restaurant anywhere. That means it was a bit greasy, perhaps, but also very good.
Had we stayed in Montréal a third night, we could have gone to the opening of a new Cirque du Soleil production at the troupe's home base. If we're ever back, we'll try to time it to see Cirque du Soleil. We were told that elsewhere in Quebec Province we might run into language problems, but in Montréal virtually everyone spoke English. Only at the Tibetan restaurant did anyone even ask if we spoke French.
Maybe that accounts for my lack of enchantment with the city -- it did not seem as foreign as I had expected.
Posted by Steve Bailey at 1:01 PM 5 comments: Links to this post