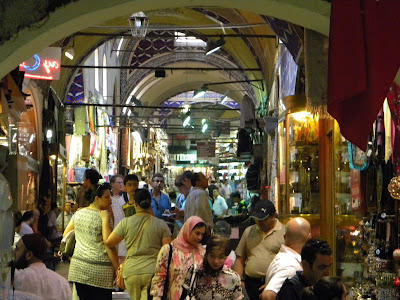 Seth Kugel is blogging his way through foreign countries as the New York Times Frugal Traveler. Click HERE for his July 17, 2011, article about a $100 weekend in Istanbul.

This was possible because he couch-surfed, which means he stayed for free with someone he contacted through www.couchsurfing.org. This may seem sketchy, but loads of people, most of them younger than Seth, do this. My daughter, who lives in Wisconsin, has played host to couch surfers and has couch-surfed herself, staying a night or two this summer with a young woman in France.
Spending a weekend and only $100 in Istanbul meant that Seth's visit to the Grand Bazaar, shown here, ended with no shopping bags and no rugs for the trip home.
My wife and I really enjoyed Istanbul on a trip to Turkey last year. Earlier posts on this blog discuss Istanbul, the baths there, and other aspects of a vacation in Turkey -- but not on Seth Kugel's meager budget.
Seth doesn't mention visiting the great archaeological museum in Istanbul, which was a highlight of our visit. Its collection of artifacts far outshines anything you'll see in New York or London.

Posted by Steve Bailey at 2:46 PM 4 comments: Links to this post