When Cost Is a Major Factor in Deciding Where to Go 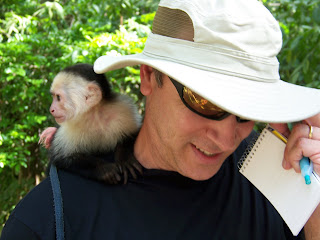 Click on the title of this posting to visit Tim Leffel's Cheapest Destinations Blog. He's a travel writer who has been around the world three times and written from five continents over the last 20 years or so. He's the author of "The World's Cheapest Destinations," currently in its third printing, as well as other travel books.
His blog is full of good advice for getting the most bang for your buck. Here's a sample:

We can debate forever about the differences between a traveler and a tourist, but sometimes it pays to step off the snob stool and just go for the best value possible, especially on a vacation. Unless you’re on a really tight shoestring budget, often you can get a stupendous deal by trolling where the tourists go to book their trips.

Case in point: my just-finished vacation in Puerto Vallarta with my family. I could have booked us into a crappy downtown hotel with barely functioning air conditioning and cramped quarters for around $75 a night for three, nothing included, with the nearby beach choices a few blocks away being lousy. Instead I went onto SkyAuction.com and scored four nights at an all-inclusive hotel on the Nuevo Vallarta beach for $82 a night all-in. For that amount we got all the booze we could drink, all the food we wanted to stuff ourselves with (three of us!), a nice room with a panoramic ocean view, Wi-Fi, and lots of activities. (The boogie boarding rocked.)

Yes it was cheesy and yes we felt like your average package tourists, but so what? My daughter had a blast, there was a never-ending Negra Modela tap going, and we ate pretty well without ever taking my wallet out of the room safe. I would definitely do it again.

Posted by Steve Bailey at 5:46 PM No comments: Links to this post

Turkey: An Australian's Take on Istanbul


Istanbul is a magnet for people from all over the world. Its history, culture and geography make it the world's No. 1 crossroads -- physically, as the bridge between Europe and Asia; historically as Trojans, Greeks, Persians, Crusaders and others passed through; and culturally, as a place where mostly Christian Europe meets the Islamic Middle East. At right is my photo of the Galata Tower, built centuries ago by Italians.
Writer Jan Morris finds Istanbul enchanting. Here is an excerpt of an article Jan wrote for the Sydney Morning Herald:

Nowhere in Europe is more suggestive than the rambling enclave that is the Topkapi Palace, where once the Ottoman sultans held court, where the harem gossiped and the executioners sharpened their blades and from whose gardens you can look out across the fateful waters of the Sea of Marmara and the Bosphorus. No refreshment break is more satisfying than a cup of thick coffee and a sweetmeat taken at a table beside the Golden Horn, frequented by seafarers since the days of Homer. You can imagine in these streets the imperial legionaries of Constantine himself, the janissaries of Islam, looting Christians from Venice on their way to the Crusades, merchants from all the nations setting up their stalls in its famous markets.

Read Jan's entire article by clicking on the title of this post.
Posted by Steve Bailey at 12:33 PM No comments: Links to this post